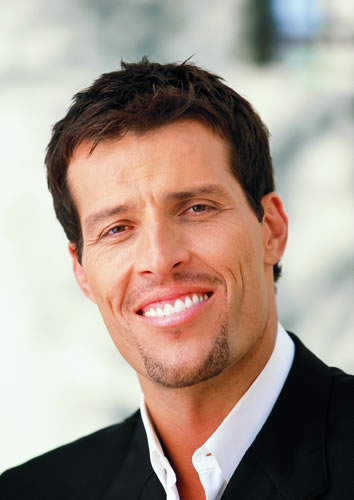 For the past three decades, Anthony Robbins has served as an advisor to leaders around the world. A recognized authority on the psychology of leadership, negotiations, organizational turnaround, and peak performance, he has been honored consistently for his strategic intellect and humanitarian endeavors. His nonprofit Anthony Robbins Foundation provides assistance to inner-city youth, senior citizens, and the homeless, and feeds more than three million people in 56 countries every year through its international holiday “Basket Brigade.” Robbins has directly impacted the lives of more than 50 million people from over 100 countries with his best-selling books, multimedia and health products, public speaking engagements, and live events.

In addition to his global efforts to facilitate leadership, peace and philanthropy, Robbins is an award-winning speaker who has addressed such distinguished audiences as the British Parliament, Harvard Business School, the Gorbachev Foundation’s Cold War Forum, the Presidents’ Summit for America’s Future, the State of the World Forum, Vice President Al Gore’s Putting Customers First Conference, and the World Economic Forum.

He has also featured in movies like Shallow Hall where he plays as a motivational speaker.

This is a video clip of Anthony Robbins Tony Robbins one of the World’s greatest motivational speakers. Many say that this particular speech of his is better than the President Obama’s Inauguration Speech? What do you think?


In the video clip below, Tony Robbins speaks on Why we do what we do, and how we can do it better. Tony Robbins discusses the “invisible forces” that motivate everyone’s actions — and high-fives Al Gore in the front row.

TEDTalks is a daily video podcast of the best talks and performances from the TED Conference, where the world’s leading thinkers and doers are invited to give the talk of their lives in 18 minutes — including speakers such as Jill Bolte Taylor, Sir Ken Robinson, Hans Rosling, Al Gore and Arthur Benjamin. TED stands for Technology, Entertainment, and Design, and TEDTalks cover these topics as well as science, business, politics and the arts.