Today’s success story shows how the Magic Check works in its own ways. If you focus on your work and have faith in yourself you will achieve your goals even if you don’t look at the Magic Check every day.

My whole life I had never really made a great amount of money. My earnings have, for the most part, always been in the thirty thousand dollar a year range. Some years lower and a few years higher. I went through a rough patch in latter 2007. I was attempting to relocate to another town and this included changing jobs. It was a tough move. As a result of the move and changing jobs, my total income for the year 2008 was just over ten thousand dollars. I was depressed and devastated.

In early 2008, as I was struggling, I stumbled upon a copy of The Secret DVD which I had bought a couple of years earlier. I watched it and was really inspired. I got on The Secret website and began to read The Secret stories of others that had used The Secret to achieve great things and then manifested wonders into their lives.

Then I saw the Magic Check. I thought, hmm, maybe I should fill one out and give it a try. I printed out a copy and filled out the amount for $100,000. This is more money than I had ever made, times three, in my whole life. But what the heck, you gotta think big. I put the check in a drawer and never thought about it again. So 2008 strolled along and, like I said, I barely made ten thousand dollars the whole year. Then in 2009 I again only made around thirty thousand dollars for the year. 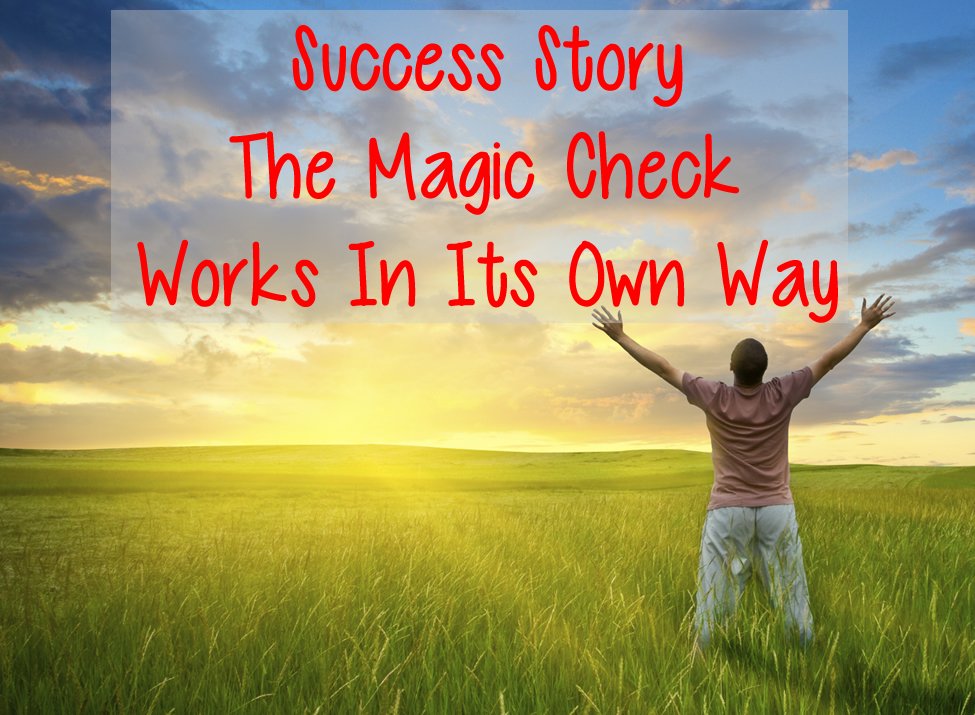 Then I got an opportunity to take a different direction in my career. It would require me to travel and be away from my family. However, with our finances as they were and had been, my wife and I agreed it was the best move for us. That year I made almost seventy thousand dollars. Twice what I had ever made before, ever. The following year it dipped a little due to weather related layoffs, but the next year it climbed up to over eighty thousand dollars. 2013 saw my pay for the year at almost one hundred twenty thousand dollars. The following year it reached one hundred twenty-four thousand. Then in 2015 it grew again and this year will end with my income being even better.

A few months ago my wife and I moved into a new house. As we were packing things up I opened up my desk drawer. I saw a little piece of paper sticking out from under some clutter. I pulled the bit of paper out and there it was! My Magic Check for $100,000! I had completely forgotten that I had written this check to myself in April 2008. It is now nearing the end of 2016 and I’ve got four years under my belt of earning well over one hundred thousand and a couple that came close to that mark. I took that check and pinned it up on my bulletin board. I printed out another one and I made it out for $1,000,000. Remember, go big or go home. And believe!!!

Author: Derek Nelson from Kalispell, Montana
About the Author: I live in the beautiful Flathead Valley of Montana with my awesome wife Marla and our five dogs. We’ve raised three incredible boys! They’re all out on their own now so we are empty nesters. I am a manager for a utility construction company. I’ve been with them for about 23 years. I am also an entrepreneur and love online marketing. This is my passion and am currently working on making it my full time thing. To not have to work for someone else, travel the world and make money is my dream!
Source: http://www.thesecret.tv/stories/my-magic-check-2/