When hairdresser Dianah Kendall began to lose her sight, she thought that she could no longer work.
But despite her vision being massively impaired, the hairdresser still manages to cut hair so well her loyal customers pledged to stand by her.
Ms Kendall, 56, lost her vision after suffering a brain injury last year – and was classed as too blind to drive.
The mother-of-two was at work when she started suffering a headache and was rushed into hospital the next day with bleeding on the brain.
She had suffered an intracerebral hematoma, meaning a pool of blood gathered in her brain and killed all the nerves that it touched. 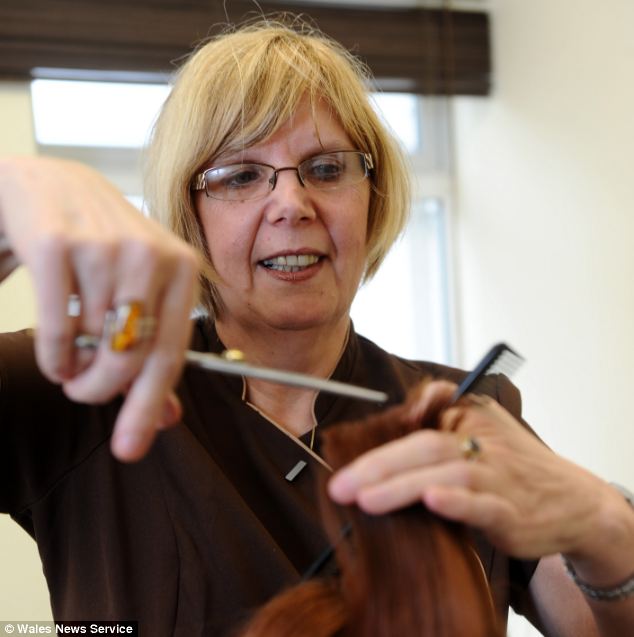 She was left with impaired peripheral vision – which means she has a limited frame of vision – and was warned she might never work again.
But her customers at Just Cuts in Pencoed, near Bridgend, South Wales, kept on coming back after she returned three months following the diagnosis.
She said: ‘They tease me about my eyesight – saying “who’d have a cut from a blind hairdresser?”.
‘But I don’t mind. Losing some of my sight and surviving is better than the other option.
‘My customers were all so supportive and were pleased when I returned to work after three months off.’
‘I couldn’t see my hand in front of my face. I was told my sight would come back slowly but it’s been over a year now and it’s worse if anything.’
But after 40 years of cutting hair the brave hairdresser was determined to continue serving her loyal customers.
She said: ‘Accepting my limitations has been difficult. I’ve had to learn that I’m not super woman. Now that my condition has settled down it only affects my peripheral vision.
‘So I trip up and can’t judge distances very well at all but if a head of hair is in front of me I can see well enough to give my usual great standard of cut.’
Shopkeeper Sara Allan, 34, said: ‘My husband teases me about going to a blind hairdresser but she’s the best.
‘I wouldn’t go anywhere else – she never fails. I’ve never left with a cut I didn’t like. She knows what I like so well that she could do it with her eyes close anyway.’
Dianah is even looking forward to expanding her hairdressing and barber shop franchise in the future – and will recruit more staff to keep up with demand.
She said: ‘I tell people that nothing should stand in your way – even if you can’t even see your way ahead.’
New customer Michelle Davies, 24, said: ‘I would never have known Dianah had problems seeing. She is so comfortable with the scissors in her hand.
‘I’ve had some terrible cuts from hairdressers who can see perfectly well, so she did a great job.’