If anyone needs a miracle healing pet story this is it.

My story begins about ten years ago when I received a young, beautiful, green youthful budgie as a friend for an old bird I had taken in a few years prior. This green budgie is named Mr. Bird. He is now an old bird going on ten plus years, yet he is a young chick at heart.

While several other birds have come and gone in my life, Mr. B is one unique little bird. He has a special bond with me that I never had with any of my other beloved birds. Though he is a grumpy, stubborn little thing that barely likes my fingers anywhere near his general area, we have had a long time together through some pretty rough times. He’s even survived a horrible ceiling fan incident in 2015 and though he was old then, I could tell he had a very strong will to live. Well, that ordeal was awful but what came a year and a half later was somehow worse.

Recently, I saw a terrible sudden decline in his health in the period of a few days. Suddenly he wasn’t his perky self. He was terribly uncomfortable, barely eating, not interested in moving about and he started vomiting frequently, several times a day. I had never seen a bird throw up and didn’t even know this could happen. Needless to say I was scared out of my mind and worried about my little feathered friend. This time, however, I didn’t have the funds to scrape together for an emergency vet visit as I had with his ceiling fan accident. I had very little resources in healing a sick, elderly bird. 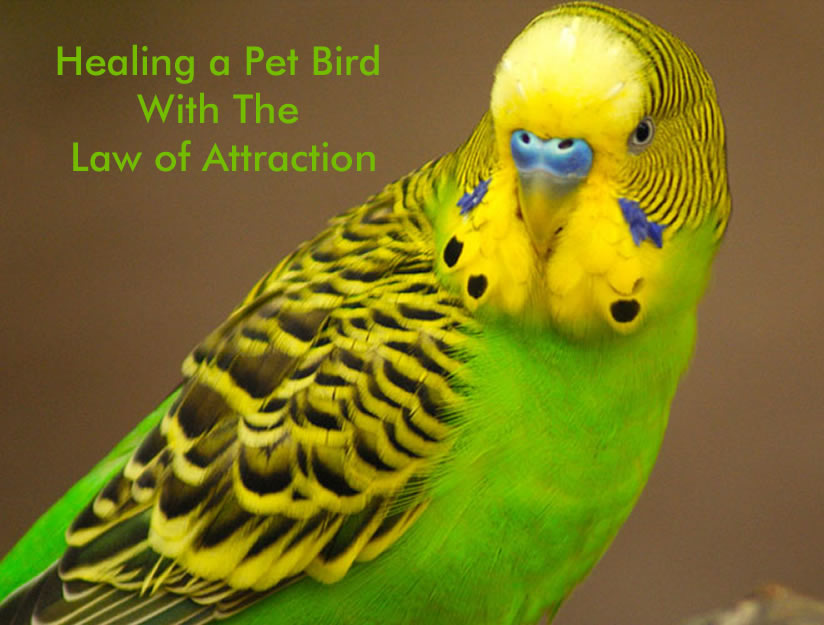 Unfortunately, I couldn’t look for any possible advice from the internet as I had to stay off of bird forums because of how fatalistic they are or how every problem a bird has is in need of seeing a vet. I knew I had to take matters into my own hands! And really I had no other choice.

Although he was very ill I noticed he was still eating a little and drinking his water. Seeing that hold on life had me desperate to find a way to heal him. I wasn’t ready to let him go and I don’t think he was ready to go just yet either. So I poured myself into The Secret teachings.


I had read The Secret in 2011 and hadn’t really comprehended the material very well, so I manifested nothing of significance. I had driven myself crazy with hundreds of LOA books and forums over the years but it was so complicated with different teachings that I was getting overwhelmed. Now with my bird sick, I decided to go back to basics with Rhonda’s books, The Secret, The Magic, and The Power.

Every day I wrote gratitude lists, every day I thanked the Universe/God for my bird’s health. As I watched him suffer through vomiting in the middle of the night I thanked and thanked for his health. I talked to him, promising him that everything was going to be alright and that he would get better soon. I surrounded him with crystals, played his favorite One Direction song, prayed, wrote healing words on his water cup, fed him warm chamomile tea and gave him vitamin drops in his water and pictured days to come where my little green budgie would be his perky self again. I just kept saying that as soon as he got better I would write my story here on The Secret website. And look, here I am! Sorry for the spoiler alert!

His condition went from bad to worse and while I had some very low points in my believing, I just held onto positive thoughts and gratitude and thanked him and the Universe for his health and read success stories here to help me believe.

After a grueling two weeks I can safely say he has overcome whatever illness had a hold of him. He is still recovering but he has stopped vomiting altogether and now sleeps through the night peacefully. He sings songs again and his plumage has gone from muted greens to bright highlighter colors once again. I am so amazed at this. He is literally a miracle bird.

I am so grateful to the Universe and to The Secret. And of course I am so very thankful for Rhonda and her team for bringing this book to the world. I don’t think he’d be here today if it wasn’t for The Secret.

And now I am off to manifest my dreams of becoming a YouTuber and many other things I have been desiring to do! Thank you all so much. If anyone reading this has a very ill pet, there is always always always hope. Just believe and do your best and things will be OK, I promise.

Author: Nikole Sweet from Arizona, USA.
About the author: A girl rebuilding broken dreams starting with The Secret, The Magic, and The Power.
Source: http://www.thesecret.tv/stories/healthy-bird/