Well, you must have read success stories where people have used the law of attraction to get anything that is possible in this world. This is a unique story where the author Kevin gets into a Nicki Minaj music concert free of charge (even though he had no chances) by using gratitude and the law of attraction.

I live in New York and my life so far has been quite amazing because of the beauty of law of attraction. Recently an amazing experience has just blown me away showing how the Universe provides. So there I was on July 24th of 2015. I had planned the perfect day for me and my sister. We were going to have an adventure in the city. Nicki Minaj was presenting on one of the Good Morning America’s Free park concerts in Central Park. We woke up at 2 am and began the journey to the concert. We waited on the line for 4 hours because doors opened at 6 am, as it was a live taping.

As it was our turn to enter, we notice everyone around us began to take out these sheets of paper. I was aware there were VIP tickets to the first few who came. There was 100 plus people there before us so I assumed that’s what it was. Then security and the entrance denied us entry. Turns out it was a ticketed event. You usually don’t need tickets for these concerts, they are usually on a first come, first serve basis. But for Nicki Minaj you needed to request tickets online.

Now Panic begins to set into my system because I might be missing the chance to see one of the best people on this planet. But I had waited one line for 4 hours and I had an amazing morning planned. I remembered that theses emotions I was feeling shape my reality. So I had my gratitude rock in my pocket and began imagining myself in the crowd singing along to the songs and taking pictures. I began to get myself in a state of already being there. This is where magic began to happen! 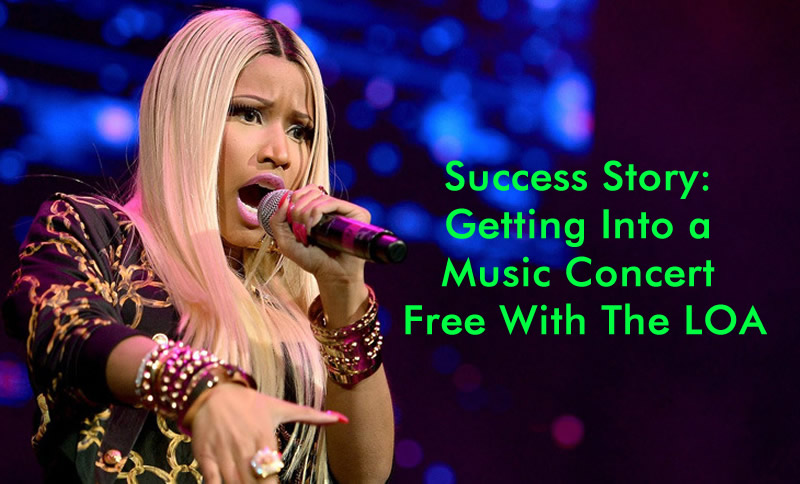 I decided to try to persuade a guard to let me in but it didn’t work. I was not going to give up, so apparently he mentioned that there might a line on the other side of the park stage where people who don’t have tickets can line up to get in, if there was space once the concert began. I saw this as a miracle so I took it. I went with my sister and we were the second ones there. I was holding my gratitude rock hoping for my miracle. So the couple in front of us got VIP tickets because someone felt bad for them. I began to freak out because I deserved to be in the concert.


Now it was 7:50 am and the concert looked packed and my hope was dwindling. I began to feel good for the couple that got in, hoping they enjoy it. This helped me get in a state of gratitude. That’s when it happened.

As I held my gratitude rock a kind security lady walked over and mentioned there was some space left and began to let us in. I realized that was the Universe! Because on that line there were about 200 people and only the first 80 or 90 got in, and I was one of them.

I had a great view of Nicki and I went to the concert and saw the love taping. I lived one of my dreams and it was amazing!!

Please don’t ever lose your state of gratitude, that is what will shape your life. Thank you Rhonda and The Secret team for everything they have provided for us. I am living the life I want right now and continuing to shape it as I grow. Bless you all!

Author: Kevin L from NYC
About the author: I was 14 when I discovered The Secret I am truly blessed to know about it at such a young age. I’m currently living a prosperous life in NYC. I love it here. I am a student and will be heading to Stanford in the fall, super excited. My dreams are coming true.
Source: http://www.thesecret.tv/stories/nicki-minaj-gratitude-rock/