The past four months have been extremely stressful, as I’ve been preparing for the Examination for Professional Practice of Psychology (EPPP) – on tomorrow. Similar to the Bar exam for lawyers or Boards for medical doctors, the EPPP is the final step toward licensure as a psychologist. For me it is the final step in a 13 year journey to fulfill my dream of helping people by becoming a PhD psychologist. Unfortunately, after facing what seemed like a never ending stream of financial, professional, and spiritual difficulties over the years, and lately hearing numerous stories of the struggles and failure rate of other applicants, my belief in the validity of spiritual principles and confidence in my own ability to pass the EPPP had waned considerably. At times, with thought of age-related cognitive decline, it seemed impossible for me at age 53, to study and remember the incredible amount of information covered by the EPPP. The result was stress in the form of depression, anxiety, disrupted sleep patterns, loss of appetite, procrastination, and self-doubt. These negative feelings are exacerbated by scores on eight practice exams I’ve taken over the past two weeks, where I achieved a passing score only once! 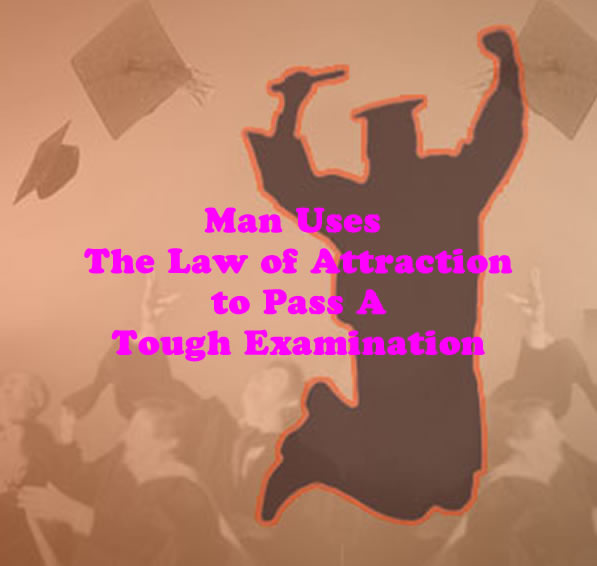 Fortunately, my son Andrew away at college introduced me to The Secret about 10 days ago. Later, my wife and I bought a copy of the book and CD set and have watched, read, or listened to The Secret daily. The Secret really is The Layperson’s Guide to Life.

One specific Secret idea I started applying yesterday was to prepare 10 copies of the letter from the state board of psychology notifying me of my passing EPPP score. (I cut and pasted letterhead from a previous e-mailed letter from the board). I put these passing notification letters in the mailbox, on the nightstand, the kitchen table, etc., all over the house, even on the toilet seat, where I’d be sure to see them at wakeup and as I went about my regular routine. Periodically I’d pick one up, open it, and excitedly read the announcement of my passing score. If my wife was home, she’d excitedly congratulate me. In one day I’ve already used up the original 10, so this morning I prepared another 10 for today.

I’m thankful to The Secret for reminding me of the Law of Attraction, to have faith in myself, and that I have already passed the EPPP tomorrow.

In the past, I would never do something like this beforehand – just in case I don’t pass and look stupid. However, I’m submitting this personal story to the world in advance, as an active testimony to my faith in the Law of attraction, myself, and my EPPP passing score.

I took the national EPPP (Exam for the Professional Practice of Psychology) on Wednesday, 26 September, 2007, 4:30 pm to 9:00 pm. Though I felt good during the exam, there were many difficult questions, which left me not quite sure I had passed. I was told it would take 2-4 weeks to get the results, so while waiting, rather than becoming depressed and essentially creating what I did not want via a negative mood, I followed The Secret principle of staying focused on what I want despite lack of outward evidence. I also repeated the affirmation, “I am receiving” and continued to send myself 6 – 8 passing notification letters every day by strategically placing them in the mailbox and around the house, so I’d discover them throughout the day. Shortly before the exam, I had also created a detailed score sheet giving myself an overall score of 80% (passing score is 70%). I hung this in my home study, where I’d see it every day and visualize a passing score of 80%.

My results came on Saturday, 6 October, 2007 — 84%!!!!! A week later, I took the State portion of the licensure exam using the same Secret insights, and also passed.

As of 26 October, 2007 I am a Florida licensed psychologist (license # PY 7610). Two weeks ago, I started a position providing psychological services to nursing homes where I have the opportunity to make a meaningful difference in the lives of many residents. I am also in the process of establishing a private practice.

About Hugh Forde from Ocala, Florida: