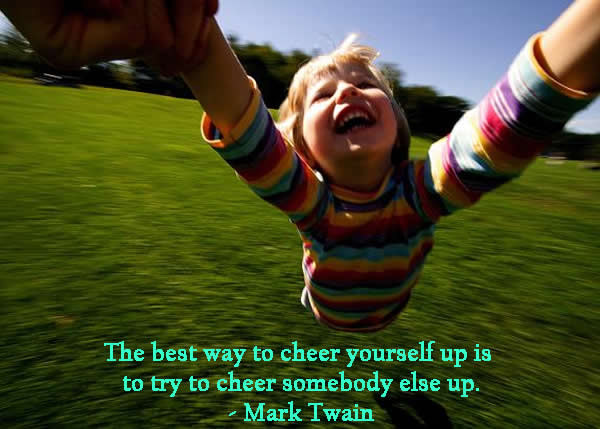 “Being happy doesn’t mean that everything is perfect. It means that you’ve decided to look beyond the imperfections.”

If you want to be happy, be.

Happiness is like a butterfly which, when pursued, is always beyond our grasp, but, if you will sit down quietly, may alight upon you.

Even if happiness forgets you a little bit, never completely forget about it.

Happiness is never stopping to think if you are.

Most people would rather be certain they’re miserable, than risk being happy.

The best way to cheer yourself up is to try to cheer somebody else up.

If only we’d stop trying to be happy we could have a pretty good time.

Happiness is excitement that has found a settling down place.  But there is always a little corner that keeps flapping around.

Nobody really cares if you’re miserable, so you might as well be happy.

Happiness is always a by-product.  It is probably a matter of temperament, and for anything I know it may be glandular.  But it is not something that can be demanded from life, and if you are not happy you had better stop worrying about it and see what treasures you can pluck from your own brand of unhappiness.

Those who can laugh without cause have either found the true meaning of happiness or have gone stark raving mad.

Man is fond of counting his troubles, but he does not count his joys.  If he counted them up as he ought to, he would see that every lot has enough happiness provided for it.

What a wonderful life I’ve had!  I only wish I’d realized it sooner.

The foolish man seeks happiness in the distance; the wise grows it under his feet.

Happiness often sneaks in through a door you didn’t know you left open.

“Well,” said Pooh, “what I like best,” and then he had to stop and think.  Because although Eating Honey was a very good thing to do, there was a moment just before you began to eat it which was better than when you were, but he didn’t know what it was called. 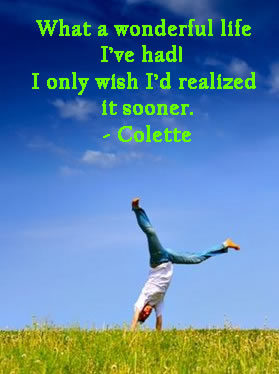 It’s pretty hard to tell what does bring happiness.  Poverty and wealth have both failed.

Happiness and sadness run parallel to each other.  When one takes a rest, the other one tends to take up the slack.

Often people attempt to live their lives backwards; they try to have more things, or more money, in order to do more of what they want, so they will be happier.  The way it actually works is the reverse.  You must first be who you really are, then do what you need to do, in order to have what you want.

Indeed, man wishes to be happy even when he so lives as to make happiness impossible.

Can anything be so elegant as to have few wants, and to serve them one’s self?

There are two things to aim at in life:  first, to get what you want; and after that, to enjoy it.  Only the wisest of mankind achieve the second.

This is my “depressed stance.”  When you’re depressed, it makes a lot of difference how you stand.  The worst thing you can do is straighten up and hold your head high because then you’ll start to feel better.  If you’re going to get any joy out of being depressed, you’ve got to stand like this.

Pleasure is spread through the earth

In stray gifts to be claimed by whoever shall find.

Most folks are about as happy as they make up their minds to be.

Happiness is a form of courage.

We must laugh before we are happy, for fear of dying without having laughed at all.

Tranquil pleasures last the longest; we are not fitted to bear the burden of great joys.

We tend to forget that happiness doesn’t come as a result of getting something we don’t have, but rather of recognizing and appreciating what we do have. 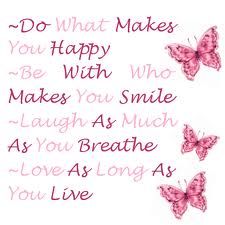 Every now and then,

when the world sits just right,

a gentle breath of heaven

fills my soul with delight…

It’s never too late to have a happy childhood.

Happiness is the soundtrack of my life.

The secret to happiness is to put the burden of proof on unhappiness.

Happiness?  That’s nothing more than health and a poor memory.

Happiness is not a goal; it is a by-product.

Happiness is a direction, not a place.

Of all the things you wear, your expression is the most important.

A truly happy person is one who can enjoy the scenery while on a detour.

Happiness held is the seed; happiness shared is the flower. 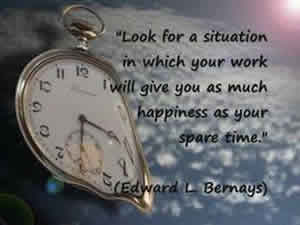 The best vitamin to be a happy person is B1.

A great obstacle to happiness is to expect too much happiness.

Is it not clear, however, that bliss and envy are the numerator and denominator of the fraction called happiness?

A happy thought is like a seed that sows positivity for all to reap.

Happiness is not an ideal of reason, but of imagination.

Man must search for what is right, and let happiness come on its own.

If you search the world for happiness, you may find it in the end, for the world is round and will lead you back to your door.

Just as a cautious businessman avoids investing all his capital in one concern, so wisdom would probably admonish us also not to anticipate all our happiness from one quarter alone.

There are some days when I think I’m going to die from an overdose of satisfaction.

The secret of happiness is to find a congenial monotony.

We are no longer happy so soon as we wish to be happier.

The only way to avoid being miserable is not to have enough leisure to wonder whether you are happy or not.

Real elation is when you feel you could touch a star without standing on tiptoe.

The search for happiness is one of the chief sources of unhappiness.

If there were in the world today any large number of people who desired their own happiness more than they desired the unhappiness of others, we could have a paradise in a few years.

The world is full of people looking for spectacular happiness while they snub contentment.

Cheerfulness is what greases the axles of the world.  Don’t go through life creaking.

What I’m looking for is a blessing that’s not in disguise. 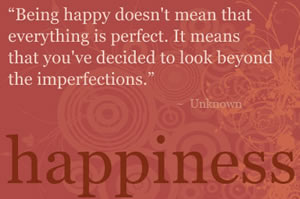 My crown is called content, a crown that seldom kings enjoy.

Ask yourself whether you are happy and you cease to be so.

We are seldom happy with what we now have, but would go to pieces if we lost any part of it.

The search for happiness is unlike any other search, for we search last in the likeliest places.

As people spin faster and faster in the pursuit of merely personal happiness, they become exhausted in the futile effort of chasing themselves.

Happiness is the feeling you’re feeling when you want to keep feeling it.

Joy is a flower that blooms when you do.

So long as we can lose any happiness, we possess some.

Jumping for joy is good exercise.

She thinks that happiness is a mat that sits on her doorway.

Happiness is a by-product of an effort to make someone else happy.

Happiness is a way station between too little and too much.

The happy have whole days,

and those they choose.

The unhappy have but hours,

and those they lose.

The art of living does not consist in preserving and clinging to a particular mode of happiness, but in allowing happiness to change its form without being disappointed by the change; happiness, like a child, must be allowed to grow up.

Happiness is a matter of one’s most ordinary and everyday mode of consciousness being busy and lively and unconcerned with self.

Happiness is… usually attributed by adults to children, and by children to adults.

When neither their property nor their honor is touched, the majority of men live content.

The happiness of most people is not ruined by great catastrophes or fatal errors, but by the repetition of slowly destructive little things.